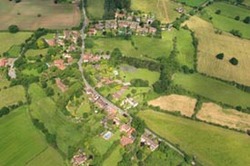 Barston is a small village with natural boundaries formed by the River Blythe and one of its tributaries.

It is a situated astride Barston Lane, two miles north-east of Knowle. The centre of the village lies on higher ground and the surrounding land is agricultural, mainly pasture.

Physically, the village has a largely unspoiled rural appearance. The nature of the village has changed from being historically agricultural to now being a mostly commuter settlement of considerable charm and character.

Its original name Bercestone or Bertonstone is believed to derive from 'tun' (farmstead) and Beornstan, an Anglo-Saxon personal name, presumably the name of one of the lords of the manor. 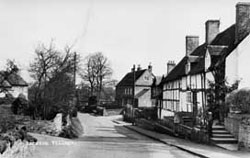 It was described in the Domesday Survey of 1086 as being held by Turchil of Warwick. By the 13th century the land had become the property of the Knights Templar who resided at Temple Balsall. In 1312 the entire Order was forcibly disbanded and Barston passed to the Knights Hospitaller of St John of Jerusalem who held it until the 16th century. Henry VIII then confiscated the land and gave it to his last wife, Catherine Parr. With her death, it was sub-divided amongst a number of families, the most influential being the Fisher family of Escot (Eastcote) which retained part until the 19th century. The 1843 tithe apportionment (available at Solihull Heritage & Local Studies Service) indicates that there were about 30 farms in the area at that time.

The population remained relatively constant throughout the 19th century but rose after the First World War following the construction of council houses in Oak Lane. 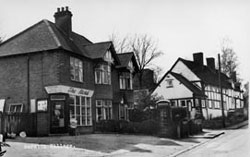 St Swithin's church was built in 1721, although a church did exist in the village during the Middle Ages and the church registers date back to 1598. Copies of the registers 1598-1964 are available at Solihull Heritage & Local Studies Service. Until it became a parish in its own right in 1894, Barston was a chapelry of Berkswell.

In 1972 the greater part of the village was designated a Conservation Area.

Pronounced "Escot", this is a hamlet in the parish of Barston, situated on the north-western end of the sand and gravel ridge of which Barston is at the south-eastern end. It is about one mile north-west of St Swithin's church.

The most important feature of the hamlet is its four great houses: Wharley Hall; Eastcote Manor; Eastcote House and Eastcote Hall.

Select the map to see a larger version in PDF

Special study of the parish of Barston, Warwickshire by Margaret Hudson, 1968

Check the online catalogue to see if the above books on Barston are available at your local Solihull library.

Let us know your memories of Barston or Eastcote, however recent, by completing a memory sheet attached below.