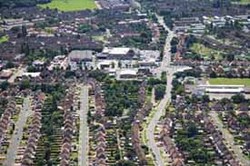 Castle Bromwich was part of the parish of Aston until 1894 and is recorded as Bramewice in 1168 and Bromwice in 1199.

The name Bromwich means "settlement in the broom", broom being a yellow flowering bush that grew in abundance in the area. Castle is a Middle English addition to the name to distinguish the settlement from the other bromwiches in the area.

The castle was a 12th century wooden motte and bailey construction to the north of the church. The remains of the motte can still be seen today, between the M6 and the Collector Road and is known locally as "Pimple Hill". There was an extensive archaeological dig of the "Pimple Site" prior to the construction of the Collector Road in the 1970s.

Two turnpike roads met at Castle Bromwich. The road from London to Chester and the road from Birmingham to Coleshill met near Castle Bromwich Hall. There was a tollgate at the junction of Chester Road, School Lane and Old Croft Lane, near the village green.

Castle Bromwich railway station, located to the north of the village, was opened in 1842 on the Birmingham and Derby Junction Railway. The station was rebuilt in 1901 on a bridge over the Chester Road. It was closed in 1968 and demolished in 1975 but freight trains still use the line.

The hall is a Grade I listed building and was built in approximately 1599 for Sir Edward Devereux, MP for Tamworth, High Sheriff of Warwickshire and son of Sir Walter Devereux, first Viscount Hereford. On Sir Edward's death, the house was bequeathed to his eldest son Walter and then to his grandson Leicester Devereux. In 1657, it was bought by Sir John Bridgeman who added a third storey to the building. The hall was heightened and altered internally in 1719 and was further enlarged in 1825-40 by the addition of the north-east tower wing.

James Lees-Milne, Historic Buildings Secretary of the National Trust 1936-51, describes his visit to Castle Bromwich Hall in September 1945: 'The house ... vacated by the troops ... is in a filthy mess. Every window broken by several bombs dropped in the garden. All the heraldic glass has been destroyed. The most alarming threat is the dry-rot which is rampant.'

In 1969, the estate was sold by the Earl of Bradford to Paige Johnson Construction for use as the company's corporate headquarters. More recently, the property was leased to the General Electricity Company and was also used as a regional headquarters by Bovis Homes until the Castle Bromwich Hall Estate was sold to Meriden-based telecom company GPN in April 2001.

In July 2002, GPN, which designed and built mobile phone masts, went into administrative receivership and the estate was sold in February 2003 by receivers. In May 2003, the new buyer broke up the estate into 6 lots, which were sold again. The hall and three acres of gardens were purchased by an overseas buyer in June 2003.

The Parkland is owned by Birmingham City Council and six acres of walled gardens are leased by the Castle Bromwich Hall Gardens Trust.

The gardens were developed by several generations of the Bridgeman family but fell into decline in the second half of the 20th century until they were rescued in 1985 by the establishment of Castle Bromwich Hall Gardens Trust.

The 10-acre walled gardens are Grade II* listed and are being restored by the Trust to as near as possible to the period 1680 - 1740.

Castle Bromwich Playing Fields was used as a private aerodrome in the early years of the 20th century, before being requisitioned by the War Office in 1914.

In 1925, the Midland Aero Club began using Castle Bromwich Aerodrome as a base. In October 1926, the 605 (County of Warwick) Squadron of the RAF was established at the aerodrome and was one of the first RAF Auxiliary Squadrons. In 1939, its role changed from a bomber unit to a fighter unit as the war approached.

The Castle Bromwich Flying Club was also in existence during the 1930s.

During the Second World War, the aerodrome was the headquarters of an Anti-aircraft Co-operation Unit' and an 'Aircraft Servicing Unit'. The airfield was used by Vickers Armstrong test pilots flying Spitfires, Wellingtons and Lancasters. The chief test pilot was Alex Henshaw MBE, who died in February 2007, aged 94.

After the war, the airfield remained a service station of the RAF Reserve Command (later RAF Home Command) until it was closed down as a flying centre on 21st March 1958. The land was sold to Birmingham City Council on 21st September 1960 and construction of the Castle Vale estate began in May 1964. On 8th October 1965, in the centre of Castle Vale, Alex Henshaw unveiled a memorial consisting of the RAF badge that used to guard the entrance to the Officers' Mess.

In 1938, the Air Minister, Sir Kingsley Wood, cut the first sod towards the construction of the new factory, managed by the Nuffield Organisation. Having not produced a single Spitfire by the time of Dunkirk, the factory was placed under the control of Vickers-Armstrong and produced 1,298 Spitfires by the end of 1941.

During World War II, Castle Bromwich aircraft factory, situated on the west side of the Chester Road in Castle Vale, made Spitfires and components for Lancaster bombers, at its peak turning out 320 Spitfires and 20 four-engined Lancaster Bombers each month.

Production continued until 1945, the test flight of the last Spitfire to be produced there, PK614, taking place on 30th November 1945.

The factory was a target of enemy bombers and was hit by more than 200 bombs during the war, which killed 11 workers and injured 55.

After the war, the aircraft factory became a car body factory, first owned by Fisher & Ludlow and most recently by Jaguar.

Click on the map to view a larger version in PDF

Castle Bromwich: its airfield and aircraft factory, by M.D. Newell, 1982

Castle Bromwich (Warwickshire) in times past, by C.W. Green, 1984

The ever changing village: Castle Bromwich - it's [sic] history and development, by Colin W. Green and Jerry Dutton, 1989

Check the online catalogue to see if the above books on Castle Bromwich are available at your local Solihull library.

Let us know your memories of Castle Bromwich, however recent, by completing a memory sheet below.