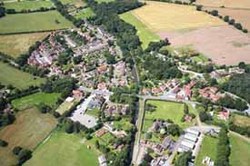 The village grew up from a small heath in the manor of Longdon, which merged with the manor of Ulverlei to form Solihull.

The name Catherine-de-Barnes derives from Ketelberne, a 12th century lord of the manor. The village has been known colloquially since the 19th century as Catney Barnes, often abbreviated to Catney.

Catherine-de-Barnes School was built in 1880 by Joseph Gillott (junior) of Berry Hall.

Catherine-de-Barnes Isolation Hospital was built by Solihull and Meriden Rural District Councils and was open by 1910. The intention was to isolate patients suffering from contagious diseases such as diphtheria, typhoid fever and smallpox. When these became less prevalent, the hospital became used as a maternity hospital, with the first child apparently being born there on 25th March 1953. 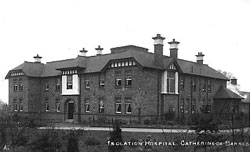 It became the national isolation hospital in 1966 and was kept on permanent standby, ready to accept patients at one hour's notice. Mrs Janet Parker, the last known person to die from smallpox, was treated here in 1978. In 1980, the World Health Organisation declared smallpox extinct and, in 1987, the fumigated hospital was converted into a select housing development called Catherine Court.

Catherine-de-Barnes past and present, by Pete Peters, Betty Simmonds and Marilyn Price.

Check the online catalogue to see if the above books on Catherine-de-Barnes are available at your local Solihull library.

Let us know your memories of Catherine-de-Barnes, however recent, by completing a memory sheet attached below.