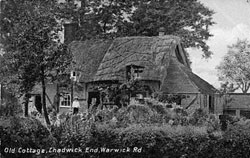 Chadwick means 'farm near a spring'. Chadwick End is approximately 6 miles south-east of Solihull town centre and is in the parish of Balsall, itself previously in the parish of Hampton-in-Arden.

The village is not a traditional village in terms of a cluster of houses situated around a village green with a church and a public house. Rather, it is a crossroads settlement that has expanded over time with a ribbon of development along the A41. It lies astride this trunk road between Birmingham and Warwick, some 3 miles from Knowle, and its position on this established route probably accounts for its development.

Traditionally a small village that supported a farming community, between 1905 and 1960 the settlement of Chadwick End, together with the adjacent Bedlam's End and Baddesley Clinton, grew considerably. A village study of Chadwick End in 1988 notes the changing make-up of the village following the move to less labour-intensive methods of farming and the consequent lack of local employment opportunities.

The village study notes the trend of house prices being out of reach for local first-time buyers and the consequent increase in the number of incoming residents who work elsewhere, meaning that the village is "slowly becoming a commuter settlement." The study mentions the difficulty of sustaining local shops in a community where most residents work and shop elsewhere and states that the only shop in the village since the late 1960s has been the 'Chadwick Stores'; the ironmongers, greengrocers and bakery all having closed.

One of the most attractive features of Chadwick End is Priest Park Wood, which is scheduled as 'Ancient Woodland', meaning that it existed before 1600. 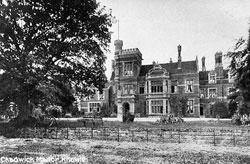 Chadwick Manor, approximately 1 mile due north of Chadwick End village, was built in 1875 for Gilbert Wilkes (1829-1882) and his family. According to the Birmingham Daily Post  21 April 1883 the architect was Edward Holmes. Gilbert Wilkes's eldest son John, then aged 20, laid the foundation stone for Chadwick Manor in 1875. The Wilkes family fortune came from brass and copper mills at Bordesley, Birmingham with the family firm, John Wilkes & Sons, being in existence since at least 1824. The company was a joint contractor for copper wiring in three attempts to lay cables across the Atlantic in 1857, 1858 and 1865.

After Gilbert Wilkes' untimely death in December 1882, Chadwick Manor was sold to Richard Ramsden sometime between 1883 and 1886. The house was converted into private flats in the early 1980s, having spent a number of years as a hotel following its sale in 1931. (Many thanks to family member Andrew Rose for supplying details of his research into the Wilkes family and giving us permission to include the information on our website).

Let us know your memories of Chadwick End, however recent, by completing a memory sheet attached right.