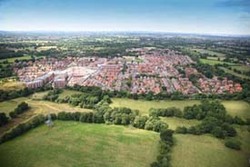 Only three miles from Solihull town centre, Dickens Heath new village, when complete, will consist of 1672 dwellings and be home to a population of about 4,000 people.

The name Dickens Heath is believed to be associated with Thomas Dykens, who lived in the district in 1524.

Dickens Heath was one of the several areas of open common land in Solihull parish. It was described as being of 10 acres in the 1632 Manorial Survey of Solihull.

At the time of the 1841 census, Dickens Heath was a hamlet and most of the people who lived there were agricultural labourers. You can seen census records free of charge on the Ancestry website from library computers.

Maps show that little changed over the next 150 years, until the new village began taking shape in 1997.

Origins of the new village

The origins of the new village date back to November 1989 and Solihull Council's need to accommodate 8,100 new homes between 1988 and 2001. The Solihull Unitary Development Plan proposed a settlement of 850 new houses adjacent to the existing hamlets of Dickens Heath Road and Tythebarn Lane.

In May 1991, there was a public enquiry into objections and, following a favourable response by the Government Inspector, Solihull Council approved the principle of the Dickens Heath project in December 1992.

From the outset, the Council decided that Dickens Heath would be special and wouldn't be just a large housing estate in the country. The Council decided that the new development would be based on the model of a traditional village, made up of shops, offices, restaurants, and homes as well as a school, library, village hall, doctors' surgery, pub, village green and country park.

London architects John Simpson and Partners devised a concept plan, which was developed and refined to become the approved Master Plan in 1995. The four key elements of the Master Plan were that the new settlement should:

In March 1995, there was a second public enquiry into the Solihull Unitary Development Plan. Outline Planning Permission was approved by the Council in December 1996. 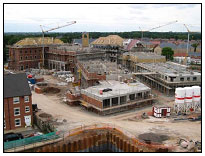 Construction began in August 1997 with the first show home opening in December 1997. The first house was occupied in May 1998. The school opened in September 2002 and the library opened in October 2004.

The Consortium of Developers was legally obliged to provide the village infrastructure at a total cost of around £10 million. The agreement required a financial contribution and/or provision of land for: 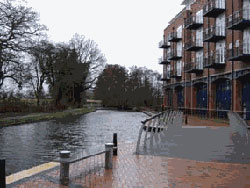 The Stratford-upon-Avon canal, which links Solihull with Warwickshire, flows around the edge of the village and is popular with canal boaters. Herons, kingfishers and ducks can be seen here, as well as bats, foxes and badgers.

Nearby woodlands, which are remnants of the ancient Forest of Arden provides a home for bluebells, wood anemones and wood sorrel.

Your impressions of Dickens Heath

Dickens Heath resident, Natalie Lebesque (34) has lived in the village for 5 years. She runs her own business as well as teaching French Classes at Dickens Heath Library and at the village school.

"When I first moved in, none of the shops were open," said Natalie. "But now, the design of the village means that everything is all very convenient - shops, restaurants and the supermarket are all within walking distance."

"Because you can walk everywhere, you tend to bump into the same people which means you get to know other people in the community who are all really friendly.

"We very much benefit from the best of both worlds here - Solihull town centre is only five or ten minutes away which you can easily get to from Whitlock End train station.

"As well as this though, you still feel like you are still in the countryside and many people enjoy walks along the canal and cycling."

Have you recently moved to Dickens Heath or do you remember the area before the new village was built? Let us know what you think by completing a memory sheet (attached below).

Are you a student researching the development of Dickens Heath? We'd be delighted to have a copy of your project to add to our collection - please contact us at Solihull Heritage & Local Studies Service.

Let us know your memories of Dickens Heath, old or new, by completing a memory sheet attached below.