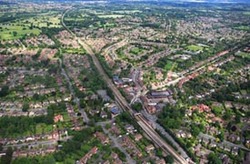 Until the London to Birmingham Railway was opened in 1852, there was no Dorridge village as such and no ancient settlement of any size. The discovery in December 1971 of a bronze axe head dating from about 1300 B.C. does indicate some Bronze Age settlement in the area.

Dorridge is first recorded in 1400, as 'Derrech', meaning a clearing in the wood frequented by animals.

The area was farmland, divided between a number of tenants in large fields and small plots, although the Tithe Map for 1839 shows a number of buildings scattered throughout the area. In 1666, Blue Lake Cottages housed two local dissenting clergymen who would hold meetings for religious dissenters. Records show that the military were called from Warwick to arrest them.

The Muntz family of Umberslade Hall were local landowners and sold some of their land for the construction of the railway, with the proviso that a station or halt be built at Dorridge, in spite of its tiny population. This provided a direct link to Paddington station on the route from Birmingham's Snow Hill station.

In 1878, the station buildings proper were erected. In the same year, St. Philip's Church was built by E. J. Payne. Enlargement of the church by J. A. Chatwin in 1896/7 is an indication that the population had already started to increase.

As in other places, the railway injected new life to the area and gave rise to much building such as public houses, shops, a doctor's surgery, detached mansions, semi-detached villas and terrace houses.

Increased activity in the village generated the need for various services such as a gas works operated by the Knowle and Dorridge Gas Company and a cattle market. A horse bus plied regularly from the Greswolde Inn in Knowle to the station, a journey of 20 minutes at a fare of sixpence. A blacksmith came to the village on market days.

A number of buildings were built with locally-made bricks and, by the 1880s, the expansion of the area had resulted in the establishment of the Knowle Brickworks. The works appears to have been disused from the early 1900s until the 1930s, coinciding with a decrease in the expansion of the community.

By the outbreak of the Second World War, the population of Dorridge still only numbered 1000. The post-war period saw a new era in Britain. More people were able to afford a motor car, enabling them to work further away from home, and from 1950 onwards the amount of road traffic increased dramatically. There was a tremendous enlargement of suburban communities and Dorridge was no exception.

An article in the Solihull News 21st April 1960 shows the enormous amount of development taking place in Dorridge at the time. The population had increased to 3,000 and the newspaper indicates that almost all of the expansion had been in the period since 1950. Interestingly, the same article notes the high levels of car ownership and comments on parking difficulties at the local shops.

"Arden Buildings", a precinct of shops, had been built in 1959 but this was still insufficient for the rapidly expanding population and, in 1965, a new shopping centre was constructed. Dorridge Shopping Centre housed a supermarket and some 30 other shops. Planning permission was given by Solihull Council in December 2011 for the Forest Court site to be redeveloped and for a new Sainsbury's supermarket to be built.

Expansion has increased over the years and Dorridge is now a large and thriving settlement within the rural area, no longer just a "railway village".

The further price a parish paid: Knowle and Dorridge in the Second World War by Michael Harrison, 2002

The price a parish paid: Knowle and Dorridge in the Great War by Michael Harrison, 1998

Around Knowle and Dorridge by Charles Lines, 1996

The History of Knowle by Eva Wootton, 1972

The Rise of the Commuter Village of Dorridge by Gem Bradley (unpublished but available for reference at Solihull Heritage & Local Studies Service, Solihull Central Library)

Check the online catalogue to see if the above books on Dorridge are available at your local Solihull library.

Let us know your memories of Dorridge, however recent, by completing a memory sheet attached right.