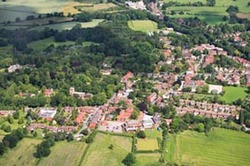 Hampton-in-Arden is situated on high ground at an historical junction of routes to Solihull, Coventry and Kenilworth.

The road to Kenilworth, having been bypassed by the A452, has fallen into disuse and just one main road, from Solihull to Meriden, runs through the village.

Hampton-in-Arden lies in a largely undeveloped area of agricultural land known as the 'Meriden Gap', which separates the conurbations of Birmingham and Coventry, and the village retains much of its original character, despite some development.

Hampton appears in the Domesday Survey of 1086 as 'Hantone' but it was also known as 'Ardene'. From the middle of the 12th century it was owned by the de Arden family, passing by marriage to the de Montford family of Coleshill and then subsequently reverting to the Crown. It was granted to Robert Dudley, Earl of Leicester, by Queen Elizabeth I in 1570 but reverted to the Crown after his death. In 1625, it was assigned to Queen Henrietta Maria, wife of King Charles I. In the early 19th century it was sold to Isaac William Lillingston who later sold the Manor of Hampton to Sir Robert Peel (former Prime Minister and founder of the modern police force).

On Sir Robert's death in 1850, the manor was inherited by his son, Frederick, who did much to 'modernise' Hampton, demolishing many half-timbered and thatched cottages. He employed the architect W E Nesfield to build new dwellings, shops and lodges.

Sir Frederick Peel was responsible for the building of Hampton Manor in 1855. The Grade II listed building later became a residential home for adults with learning difficulties, closing in 2007 and being sold a year later. Designed by Mr Giles of Derby, it is described by Nikolaus Pevsner in The Buildings of England: Warwickshire as "nothing spectacular and indeed rather dull, though dignified".

When the railway line to London was built, Sir Frederick is alleged to have used his influence as a Railway Commissioner to make the London express stop at Hampton. However, the Hampton-in-Arden Local History Group is currently researching the matter and has found that trains stopped at Hampton originally because of the Derby Junction Railway which enabled travellers from Derby to make a connection for London. The old station was constructed in 1838, the first station to open in the Solihull area. By 1844, there were apparently six trains from London stopping at Hampton.

Hampton's greatest benefactor was George Fentham (1630-1698), who was born in the village and became a successful businessman in Birmingham. Although twice-married, he left no children and, amongst specific legacies, he left an Annuity of £30 to Hampton-in-Arden, of which £20 was to pay a schoolmaster to teach the sons of poor parents of the parish, £5 was to be distributed for the relief and encouragement of 10 of the poorest families and £5 was for placing out in apprenticeship a son of a poor inhabitant. Fentham Hall, Fentham Club and Fentham Green also owe their existence to George Fentham and the Trust continues to play a significant role in the development of the village.

The chancel of the church of St Mary and St Bartholomew dates from 1130, with the nave being added in the 13th century, the north aisle in the 14th century and the south aisle and west tower in the 15th century. The spire fell "by the extraordinary violence of lightning and thunder happening on St. Andrew's Day, in the night, in the year 1643" (Dugdale, History and antiquities of Warwickshire). In the south wall of the chapel is a tomb reputed to contain the heart of a Knight Templar who died on a crusade with Richard the Lionheart. The 19th-century restoration of the church was overseen by the architect W. E. Nesfield.

Outside the village, to the south-east, is the 15th-century Packhorse Bridge over the River Blythe and on the former route to Kenilworth.

In 1968, the central part of the village was designated a Conservation Area, which is an "area of special architectural or historic interest, the character or appearance of which it is desirable to preserve or enhance".

Hampton-in-Arden: a village history by Robin Watkin and Mike Bryant, 2006

Hampton-in-Arden, a village development: a series of maps drawn by Robin M Watkin for the Hampton-in-Arden Local History Group, showing the physical and social development of the village over a period of two hundred years, 2001

Hampton-in-Arden at the Millennium compiled and edited by Mike Bryant, Ray Parker and Harry Smith, 2000

The Stonebridge Railway by Roger Waring, 1994

The story of Hampton-in-Arden Congregational Church 1838-1938 by Elizabeth B Vallance, 1938

Check the online catalogue to see if the above books on Hampton-in-Arden are available at your local Solihull library.

Let us know your memories of Hampton-in-Arden, however recent, by completing a memory sheet attached below.