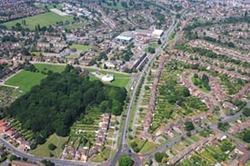 Hobs Moat is an ancient, moated site located to the west of Hobs Moat Road and north of Castle Lane. It is a scheduled Ancient Monument and was the subject of a great deal of excavation in the 1980s. Today it is a rectangular wooded area, clearly visible on the above photograph.

Pemberton suggests in Solihull and its Church that Hobs Moat is “a corruption of Odingsells’ Moat.”. Hobs Moat is said to have been the site of the home of the de Limisi and the de Odingsells families who were lords of the manor of Ulverlei and founders of what we now know as Solihull. Pemberton states "The moat, surmounted as it would have been by a stockade, would have been a formidable obstacle to assault" (1905:35) 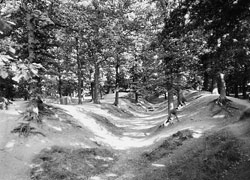 Solihull and its church by Robert Pemberton, 1905

Check the online catalogue to see if the above books on Hobs Moat are available at your local Solihull library.

Let us know your memories of Hobs Moat, however recent, by completing a memory sheet attached below.