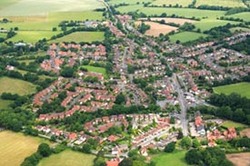 It is thought that the name Hockley is derived from 'Oakley' ('the meadow of the oaks').

The village of Hockley Heath lies astride the A34 Stratford Road, a trunk road connecting Birmingham and Stratford-upon-Avon. This is thought to be an ancient highway that may even have been a track through the Arden forest.

Once supporting a farming community, Hockley Heath owes its development to the two communication routes that run through the village: the A34 trunk road, and the Stratford-on-Avon Canal. The original settlement was at Nuthurst ('nut wood') but migrated to Hockley Heath and grew along the Stratford Road.

In 872 Werfyd, Bishop of Worcester, granted to Eanwulf the King's thane, land at Knuthyrst. After the Norman Conquest the name usually appears as Notehurst. It was Sir William Trussell of Nuthurst who announced to Edward II his deposition from the throne.

The canal, which runs from Kings Norton, was navigable as far as Hockley Heath by 1798, the remaining link to Stratford being opened by 1816. Hockley Wharf served the surrounding area and non-perishable goods were unloaded there, including timber, lime, coke, coal, cement, bricks and salt. The last commercial load was brought into the wharf on Christmas Eve, 1929.

The story of Nuthurst-cum-Hockley Heath by J J Belton, 1948

The story of Tanworth-in-Arden, Warwickshire by J Burman, 1930

Check the online catalogue to see if the above books on Hockley Heath are available at your local Solihull library.

Let us know your memories of Hockley Heath, however recent, by completing a memory sheet attached below.