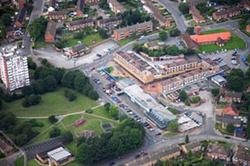 Kingshurst means 'king's wood'. It became part of the Solihull Metropolitan Borough in 1974, having been previously part of Meriden Rural District.

The earliest references to Kingshurst appear in the 13th and 14th centuries and suggest that Kingshurst is part of the parish of Coleshill. It wasn't until 1st April 1956 that Kingshurst became a parish in its own right.

By about 1352, Kingshurst was owned by Peter de Montfort who died in 1370 without leaving a legitimate heir, although his illegitimate son, Richard, inherited Kingshurst manor whilst Richard's older brother, John, inherited the manor of Coleshill.

The two manors were reunited in the early 15th century, under the control of William Mountford. In 1495, the Mountford lands were confiscated following the support of Sir Simon Mountford for Perkin Warbeck's failed claim on the English throne. Simon Mountford was executed and both Kingshurst and Coleshill were granted to the Digby family by King Henry VII. In 1529, the king restored the manor of Kingshurst to the Mountford family but it was sold back to the Digby family by Edward Mountford in about 1617. The Digbys administered Kingshurst from their main estate in Ireland and tenants included the Bull family (1610-1743), the Yorks (1743 until at least 1812), and, the Townshends (1876-1960). 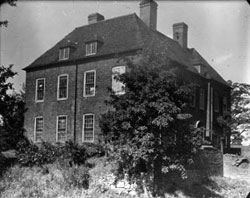 Kingshurst Hall was a large, red brick building built between the late 13th and 14th centuries. It had its own park and farmland and its tenants included the York family, who gave their name to the small area of the original Kingshurst Hall Park that still remains: Yorkswood.

The hall was rebuilt between 1700 and 1720, but fell into a state of disrepair in the 1950s when its then tenant, Walter Townshend, was unable to maintain it, owing to ill health and the death of his brother, George, in 1950. He moved out to a cottage in Caste Bromwich in 1960 and the hall was demolished in 1962.

This photograph was taken in 1957 by Stanley Jones, who had first glimpsed the building 20 years earlier when attending cub and scout camp in Yorkswood.

Do you have any memories of Kingshurst Hall that you could share with us? Fill out our Kingshurst memory sheet  and preserve your memories for future generations.

The moat and mound around the hall are the only surviving relics from early Kingshurst, apart from Yorkswood. Later buildings have come and gone on the site, but the mediaeval earthworks still remain.

The Kingshurst we see today is a mainly residential area largely created by the growth of Birmingham in the 1960s.

There are four schools, a shopping centre, library, community centre, health clinic and Connexions service. In 2001, its population was 8,126.

Kingshurst and the Council

Regenerating North Solihull is investing £1.8billion over 15 years to build new schools, increase housing choice, create village centres that will be the 'hearts' of the local community and provide new opportunities such as employment and training.

Education is at the heart of this programme. Students of Forest Oak and Merstone Schools have recently moved into an £8million eco-school, which caters for children with a range of special needs.

Pupils from Kingshurst Infant and Junior Schools have also chosen the design for their new combined school, which opened as Kingshurst Primary School in September 2007.

Solihull Council has consulted residents on a provisional plan for improvements to the area and Councillors approved the Kingshurst and Babbs Mill Neighbourhood Plan in September 2006.

Babbs Mill Park was created to commemorate the Silver Jubilee of Queen Elizabeth II in 1977. In 2002 it was designated a Local Area Nature Reserve in recognition of its diverse habitat.

Project Kingfisher was set up to preserve the stretch of the River Cole from Birmingham to Solihull in 1985. Solihull Council sponsors the programme, along with Birmingham City Council and organisations including English Nature and the Environment Agency.

There is a wide variety of trees growing at the reserve, which was designated a Local Nature Reserve in 1991. Some of the trees are invasive species and have to be controlled to protect the local wildlife. This is done by a heavy horse to protect the trees and also serves as an educational workshop.

Retired resident Fred Botterill (74) has lived in Kingshurst since 1967.

"I was involved with Project Kingfisher since 1985 and it has been a pleasure to take people out to enjoy the area including taking children out for bugs hunts and habitat walks - a tremendous amount of people are surprised when they realise that all of this is on their doorstep.

"Kingshurst is a nice place to live and has an active community with lots of people getting involved in libraries, courses and local groups. My hope for the future is that more people will get involved in conserving our woodland and lake."

Do you have any memories of Kingshurst that you could share with us? Fill out our a memory sheet attached right and preserve your memories for future generations.

Do you have any photographs of Kinghurst past or present that we could copy? Please contact Solihull Heritage & Local Studies Service on 0121 704 6977 or e-mail us at heritage@solihull.gov.uk.

History of Kingshurst: a project by Solihull Community Enterprise led by Denise Biddle, 1989

Let us know your memories of Kingshurst, however recent, by completing a memory sheet attached below.