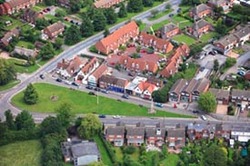 Meriden is situated at an historical crossing of route ways to the south of the main A45 Birmingham-Coventry road. It lies in a largely undeveloped area of agricultural land known as the 'Meriden Gap' which separates the conurbations of Birmingham and Coventry.

The original settlement, known as Alspath ('road to Al's dwelling') was on the hill to the east of the present-day village and was held by the Countess Godiva before 1066 and by Nicholas during the time of the Domesday survey of 1086.

The establishment of the London Road drew the centre away from the hamlet on the hill into the valley alongside the road. This was turnpiked in 1821 and Meriden became a coaching stage with several inns and ale houses. The A45 by-pass, opened in 1958, reduced the amount of through traffic, returning the road to local use through the village.

The centre of the village today is at the crossroads of the London Road with the Fillongley Road (Solihull to Nuneaton). It is along these two roads that development can be traced.

Meriden was the home of the Triumph Motorcycle factory, which moved from Coventry during the Second World War. In July 1973, a new company - Norton-Villiers-Triumph - was formed and it was planned to move production to the BSA factory in Birmingham. A sit-in by workers at Meriden lasted for almost two years until March 1975 when a workers' co-operative was set up to manufacture the Triumph Bonneville, mostly for the American market. The factory finally closed in 1983, liquidators sold the company's assets and the site was cleared the following year for housing. The Triumph name lives on in a new company, Triumph Motorcycles Limited, based in Hinckley, Leicestershire. 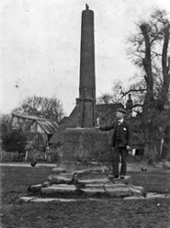 On the village green is a mediaeval stone cross, traditionally reputed to mark the centre of England. The cross is a scheduled ancient monument, known locally as 'The Stocks'

The Woodmen of Arden

The famous archery club, reputedly the oldest in England, was established at a meeting in the old Bull’s Head (Darlaston Hall) in 1785.

Also on the green is the National Cyclists' Memorial, commemorating all those cyclists who gave their lives in the First and Second World Wars.

The memorial was erected with subscriptions from cyclists and cycling clubs following a public meeting held in October 1919. It was placed in Meriden to make it easier for cyclists to reach it from anywhere in the country and is the site of an annual rally and service every May.

Tales of Triumph Motorcycles and the Meriden factory by Hughie Hancox, 1996

Meriden : odyssey of a lame duck : a study of government intervention in the motor-cycle industry - the way the money goes by Jock Bruce-Gardyne, 1978

Check the online catalogue to see if the above books on Meriden are available at your local Solihull library.

Let us know your memories of Meriden, however recent, by completing a memory sheet attached below.