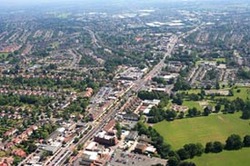 Shirley is the one of the largest areas within the Solihull Borough and consists of areas from the wards of Shirley South, Shirley East, Shirley West and Cheswick Green and Monkspath from the Blythe ward.

It lies along the Stratford Road just 3 miles from Solihull town centre and just off Junction 4 of the M42, which links Birmingham and Stratford. It also borders the counties of Worcestershire and Warwickshire.

The earliest habitation in Shirley is thought to be at Berry Mound in Solihull Lodge, which was the site of an Iron Age Hill Fort dating back to the first century BC and which covered approximately 12 acres.

Since the 19th century Shirley has truly developed from predominantly a farming area to a prominent residential suburb of Solihull.

According to Woodall and Varley the name Shirley was "First recorded circa 1240 as Syrley… the name means 'bright clearing'". Shirley like many areas during the period developed around a main street, in Shirley's case this was Shirley Street "first recorded in 1322 as Schirleystret, is that part of the Stratford Road through Shirley where, in the past, most of the houses and inns (Red Lion and Saracens Head) were situated".

During the 18th century Shirley Street became increasingly busy when the Stratford Road became a turnpike road from 1725-1872. Unfortunately, this ease of travel along the Stratford Road and its relative remote locality meant that Shirley became a popular location for people to travel in from Birmingham to participate in prohibited activities such as bull-baiting and prize fighting.

These activities, in addition to the fact that Shirley residents had to travel to Solihull to attend church, prompted a petition to Rev. Archer Clive, Rector of Solihull, and he instigated the building of a St. James' Church, a chapel-of-ease in 1832. Shirley then became its own independent parish in 1843 and its first vicar was the Rev. Nash Stephenson. Other developments followed, including included the building of a school in 1833.

The population of Shirley grew rapidly between the late 19th century and early 20th century, as people moved out of Birmingham into the area. Another major development for Shirley was the advent of the railway in 1908. From the mid-nineteenth century until 1953, Shirley also had its own racecourse, where Shirley Golf Club is situated today,

Shirley developed rapidly throughout the 1920s and 30s, with more houses, schools and shops accommodating a growing population. 1934-1937 saw the opening of a Roman Catholic Church, Odeon Cinema, public lido and a new public library.

After the Second World War much of the residential area in Shirley that we know now began to grow. Notable developments included the Shakespeare self-build housing scheme and Cranmore Housing estate. Commercial properties also increased, large companies came to the area, in particular, Lucas, who opened a large site in Dog Kennel Lane in 1965.

In March 1954, when Solihull became a municipal borough, H.R.H. Princess Margaret presented the borough's charter and the ceremony was held at Shirley's Odeon Cinema.

During the post war years the population rose drastically from around 7,000 in the early Thirties to approximately 35,000 by the start of the Seventies.

The 1980s was a decade of real change for Shirley and the face of 'Shirley Street' changed to accommodate large stores.

In 1997, Solihull Council began consultation with residents on the re-development of Shirley. A development venture company, Shirley Advance, is working with the Council to create a 'new heart for Shirley'.

Let us know your memories of Shirley, however recent, by completing a memory sheet.