It appears that Solihull was founded as a place of trade to fulfil the needs of a scattered population.

The Domesday survey of 1086 indicates that the area was one of the most sparsely populated parts of the country. Solihull is not mentioned by name in the Domesday book, instead the Manors of Ulverlei and Longdon are listed.

With the founding of St Alphege Church in approximately 1220, Solihull as we know it today began to take shape. By 1242 it was large enough to be granted a weekly market. At about the same time, Knowle became an ecclesiastical centre for the area so the district included two distinct centres set amidst scattered settlements and much woodland. The manors of Ulverlei, and Longdon declined as Solihull and Knowle prospered.

During the next six hundred years, Solihull grew slowly. The main occupations seem to have been farming and the manufacture of hunting weapons and agricultural implements.

The town was known for its blacksmiths and it was this trade that led to the clearing of the woodlands, as the trees were needed to provide fuel for their fires. 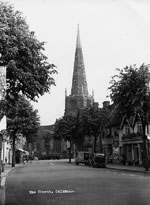 Halls were built for the rich and the general effect was to increase the population of what had been a remote part of the Midlands. By the end of the eighteenth century Solihull was the seat of the Petty Sessions court, it had its own County Court and there was a flourishing and well-respected Grammar School. It had become the main centre for a predominantly agricultural area of small farms and large halls and its markets and fairs served an area between expanding Birmingham and villages such as Tanworth and Henley-in-Arden.

The nineteenth and twentieth centuries

A description of Solihull by the anonymous author of Sketch of Solihull was published in 1840.

"[Solihull] is remarkably neat and rural in its appearance and justly excites the admiration of travellers. Though the houses of the poor are inter-mingled with those of their richer neighbours, yet no painful disparity offends the eye or impels the beholder to invidious comparisons. An air of comfort and respectability marks all alike and renders Solihull indisputably a delightful looking town."

The major change in Solihull during the latter years of the nineteenth century was the establishment of its position as a dormitory town for Birmingham industrialists and artisans.

Small villas were built in and around the old villages and larger houses along the main roads so that Solihull began to lose its rural scenery to the unplanned urban developments of the 1880s and 1890s.

The semi-rural aspect of the area attracted many who could afford to settle in the locality. The availability of land, particularly in the Shirley area, attracted some small firms into Solihull and, at the beginning of the Second World War, the Rover Company occupied a factory in Lode Lane.

From 1920, the infilling of the areas between the Coventry, Warwick and Stratford Roads began, with the construction of housing estates, schools, factories and playing fields.

The timber-framed Manor House in Solihull High Street was built in approximately 1495 and is Grade II* listed. It has never actually been home to the Lord of the Manor so isn't a manor house in the traditional sense. Once owned by the Greswolde family, it was known by the 19th century as Lime Tree House as a result of the nine lime trees that had been planted outside it about 1720. For many years it was the surgery of local doctors Ferdinand Page and his son, Ericson.

The building was purchased by a brewery in 1938 but plans to convert it into a public house were shelved on the outbreak of the Second World War. During the war the building was used as local headquarters by the Home Guard. In 1945 the house was sold, being purchased by a trust with funds raised through public subscription, and it was subsequently used as a community association and then as an adult education and social centre.

Touchwood Hall was situated at the north end of Drury Lane (near to the site of Beatties today) and was built in 1712. The source of the name is unknown but may have replaced an earlier moated house on the site. A 17th century garden wall and belvedere indicated an earlier dwelling on the site. Touchwood Hall was the home of the Holbeche, Madeley and Martineau families in turn.

Touchwood Hall stood in Drury Lane for over 250 years until its demolition in 1963 to make way for the Mell Square development. By the time of its demolition, the house was derelict, although it was argued by some that the walls, floors and ceilings were mostly sound. There were hopes that the hall could be restored in the same way as the Manor House had been almost 20 years before. However, suggestions that it could be retained as a museum or meeting place came to nothing and a compulsory purchase order was taken out on the building prior to its demolition.

The name lives on in Touchwood Hall Close, off Lode Lane, and also in the new shopping centre, which opened in September 2001.

The history of Ashleigh Road, Solihull by Nigel Ian Cameron, 2001

A Solihull century by Robin Jones, 1997

History of cinema in Solihull, 1996

"Gazed at in awe": a personal story of Solihull Gas Works and of some of the people who worked there by Alan J. Sadler, 1995

Memories of my village: Solihull in the thirties by Maxwell Leonard, 1992

Check the online catalogue to see if the above books on Solihull are available at your local Solihull library.

Let us know your memories of Solihull, however recent, by completing a memory sheet.