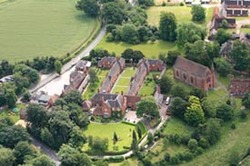 The hamlet of Temple Balsall lies halfway between the villages of Knowle and Balsall Common.

In the reign of King Stephen, the manor of Balsall was granted to the Knights Templars who built the church.

The members of the Order, founded in 1118, tried to fulfil the roles of monk and knight simultaneously.

For two centuries, they held the manor of Beleshale from Roger de Mowbray, organising village life and holding markets and fairs by charter from Henry II.

In 1324, after the dissolution of the Templars, the manor was taken over by the Knights Hospitallers (or Knights of St. John of Jerusalem). Their ownership of Temple Balsall came to an end in 1540 when they in turn were dissolved and the manor passed to the Crown.

The manor was given by Henry VIII to his last wife, Catherine Parr and then given by Elizabeth I to Sir Robert Dudley, Earl of Leicester. His grand-daughter, Lady Katharine Leveson, (widow of Sir Richard Leveson of Trentham) died in 1674 and, by her will, she founded a charity at Temple Balsall. A hospital was to be built near the church for 20 poor widows of the district and the old ladies wore gowns of grey cloth, with the letters 'K.L.' in blue cloth. A free school for 20 poor boys was also founded and provision was to be made for a minister for the church, who would also be the Master of the Hospital and teacher of the boys. The first almswomen and schoolboys arrived at Temple Balsall in 1679.

The church of St Mary was made a parish church in 1863, having previously been part of the parish of Hampton-in-Arden.

Part of the mediaeval hall of the Templars still survives at Temple Balsall today and is cared for by the Foundation of Lady Katharine Leveson. Most of the hall was demolished in 1736, with the building materials being used to construct outbuildings for the new Bailiff's house (called Temple House), which was finished in 1740.

The cellar of the Old Hall was excavated in 1981 and proved to contain a great deal of late 17th and early 18th century pottery and glass. The items found during the dig are on display at the Old Hall, Temple Balsall, which is usually open to the public during Heritage Open Days in September.

Temple Balsall: from Hospitallers to a caring community - 1322 to modern times by Eileen Gooder, 1999

Temple Balsall: the Warwickshire Preceptory of the Templars and their fate by Eileen Gooder, 1995

The organization and extent of those Warwickshire estates given to the Knights Templars then, on their suppression, to the Order of St John , and under the administration of Temple Balsall Preceptory 1146-1540 by Catherine Fell, c.1985

The finds from the cellar of the Old Hall, Temple Balsall, Warwickshire by Eileen Gooder, in Post-Medieval Architecture, 18 (1984), pp.149-249

The knights of the Temple and of S. John of Jerusalem and their connection with Temple Balsall by F R Fairbairn, 1938

Check the online catalogue to see if the above books on Temple Balsall are available at your local Solihull library.

Let us know your memories of Temple Balsall, however recent, by completing a memory sheet attached below.