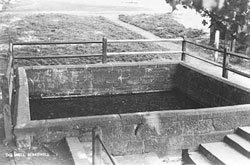 The name Berculswell probably derives from the Anglo-Saxon personal name, Bercul, which is found in Mercia and Sussex, and the freshwater spring that rises below the church to the south-east.

The 16-feet deep, stone-walled well near the 12th-century Church can still be seen today and is thought to have been used for baptisms by immersion. It was restored by public subscription in 1851.

Berkswell is an ancient site, held by the Count of Meulan at the time of the Domesday survey of 1086 and belonging to the Earl of Warwick during the Middle Ages. Most of the village has been a conservation area since 1968.

The London and Birmingham Railway was completed in 1839, entering the parish of Berskwell from London via the Nailcote Cutting, from which it was recorded that 193,766 cubic yards of rock and earth was removed. In 1844, a station was built at Berkswell and called Dockers Lane station. Dockers Lane can be seen on maps of 1884 and 1904 but was later renamed Station Road. The station itself was renamed Berkswell in 1853, later becoming 'Berkswell and Balsall Common'. Many members of the Royal Family and other famous people, including Sir Winston Churchill, have slept in their trains at the siding in Berkswell. 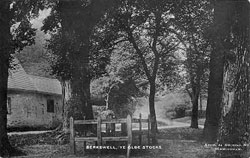 Situated on the village green are the village stocks, likely to be over 200 years old. There are 5 holes that, according to D E Gibbs in Berkswell through the looking glass, were designed to accommodate three persistent offenders, one of whom had only one leg.

The church of St John Baptist dates from the 12th century and was built on the site of an earlier Saxon church. The registers date from 1653 and copies are available to see at Solihull Heritage & Local Studies Service.

Much of the woodwork in the church was carved in the 20th century by the famous wood carver, Robert Thompson of Kilburn in Yorkshire. His mark is a mouse and 9 such marks can be found in the church. The first of his pieces to be received at the church was the pulpit, given in 1926 in memory of Mr & Mrs J H Wheatley.

The oak screen in the church was given in 1960 in memory of Lt.Col. and Mrs W H Huggins of Berkswell Grange by their four sons. One of their sons was Peter Jeremy William Huggins, better known as the actor Jeremy Brett (1933-1995). He is most famous for his portrayal of Sherlock Holmes in the TV series The Adventures of Sherlock Holmes. 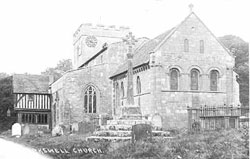 Buried in the churchyard is one of Berkswell's famous residents, Maud Watson (1864-1946), winner of the first ladies' Lawn Tennis championships at Wimbledon in 1884. Maud was born in Harrow but moved to Berkswell in 1865 when her father, Henry, became vicar at Berkswell. She lived in the village until 1932 when she moved to Charnmouth, Dorset, where she died in 1946. She was buried in Berkswell with her sister.

Also buried at Berkswell is Lettice Floyd, (1865-1934), the daughter of William Floyd, gentleman, and Alison Floyd (née Clapperton) of Beechwood House, situated on the corner of Tanners Lane and Spencers Lane. Lettice and her sister, Mary, set up a Berkswell branch of the Birmingham & District Suffrage Society but this was dissolved in 1908 when they both left to join the Women's Social and Political Union (WSPU), the suffragettes.

Lettice gained a degree of national notoriety by taking part in the suffragette "rush" on the House of Commons on 13th October 1908 and serving one month in prison as a result. She undertook speaking tours for the WSPU, was involved in other militant actions, such as the 1912 window-smashing campaign in London, and was a generous benefactor to the organisation. On the outbreak of war the campaign effectively ended and Lettice, with a fellow suffragette, Annie Williams, returned to Berkswell. They were instrumental in setting up the Berkswell Women's Institute in 1920 and lived at "Hesper" in Station Road. 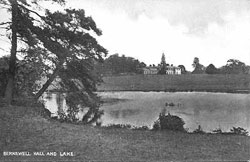 The hall is a grade II* listed building situated in a landscaped park. The house was built c.1815 by Sir John Wilmott, who later became Lieutenant Governor of Van Diemens Land. It was advertised 'To Let' in 1843 and was taken by Rev. Charles Bickmore who opened a school there. The hall and estate were purchased in 1860 by Thomas Walker, an iron master of Wednesbury.

Following his death, the estate was sold in 1888 to an agent acting for Mr Joshua Hirst Wheatley of Mirfield, Yorkshire.

Mr Wheatley died in 1925 and the hall was then taken over by his son, Colonel Charles Joshua Hirst Wheatley, who moved with his wife into the hall from Hill House. Colonel Wheatley died in 1943 at the age of 55 and the estate passed into the hands of his trustees, although his widow, Christobel, continued to live at the hall for a further 40 years. She died on 31st December 1987, aged 89.

The hall was sold in 1984 by the Trustees of the late Colonel Wheatley and converted into apartments.

Suffragette partnership: the lives of Lettice Floyd and Annie Williams by Alan Tucker, 2005

Kiss me again, 'Arry, I like it, by The Berkswell Society Local History Group, 2003

I slept in every bed in Berkswell, by The Berkswell Society Local History Group, 2002

The man who became Sherlock Holmes: the tortured mind of Jeremy Brett by Terry Manners, 2001

Berkswell 2000: rural reflections at the turn of the Millennium, by The Berkswell Society, 2000

Berkswell through a looking glass: some reflections on a West Midlands parish by D E Gibbs, 1989

Check the online catalogue to see if the above books on Berkswell are available at your local Solihull library.

Let us know your memories of Berkswell, however recent, by completing a memory sheet attached below.