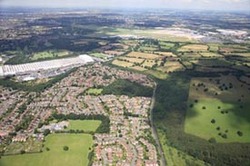 The name Elmdon means 'hill of the elms'.

At the time of the Domesday Survey in 1086, Elmdon was held by Roger of Turchil. The Victoria County History notes that Elmdon has been described as a manor since 1256, although a dispute arose in the 17th century questioning whether it had any right to such a description.

Elmdon is a small parish, measuring two miles from north to south and just over a mile in width at is widest point west to east. Part of the parish was transferred to Bickenhill parish in 1932.

There was a small mediaeval church in Elmdon when the estate was purchased by Abraham Spooner but he describes it as being "weak and dilapidated". It was demolished and rebuilt on the same site in 1781. 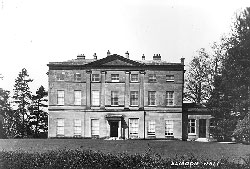 The Elmdon estate was bought in 1760 by Abraham Spooner (c.1690-1788), a Birmingham banker. He started to build Elmdon Hall in 1780 and it was completed in 1795 by his son Isaac (1736-1816/7). Isaac's daughter, Barbara Spooner, married the famous anti-slavery campaigner William Wilberforce in Hull in 1797, having apparently met him the previous year in Bath. His connection with the village is marked in the road name 'Wilberforce Way', situated off Damson Parkway.

Squire Alston remained a bachelor until his death in 1917 when the estate passed to his sister Mrs Alston-Roberts West of Stratford who sold most of the estate to the sitting tenants. In July 1930 the rest of the estate was sold and the Hall was purchased at auction for the sum of £3,700 by a Mr W. Walters of Olton who sold to it to Solihull Urban District Council in 1944. It was used by the Home Guard during the war years. The building subsequently became derelict, having a rotten staircase and roof, and was demolished in 1956.

For more information about Elmdon Hall, see the Landed Families of Britain and Northern Ireland blog.

The land around the hall was home to golden fields, hay meadows and managed hedgerows, giving home to an abundance of wildlife long since lost. Edith Holden noted the wildflowers of Elmdon Park in her diary, published in 1977 as the Country Diary of an Edwardian Lady. 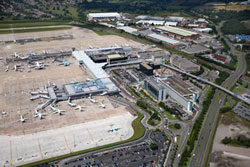 Situated on land in the parish of Bickenhill, Elmdon Airport opened on 8th July 1939. It was owned by Birmingham City Council as a municipal airport, designed to meet the needs of residents and businesses in the city and the immediate surrounding area.

Having been open only a few weeks, it was requisitioned by the Air Ministry during the war and was used by the RAF as an Elementary Flying School for RAF and Fleet Air Arm pilots. The Air Ministry built two hard surface runways (2469 ft and 4170 ft respectively) to replace the original grass strip.

It returned to civilian use in 1946 and scheduled services began in 1949 with a British European Airways flight to Paris. The airport remained under Government control until 1960 when it again became Birmingham City Council's responsibility. In 1961, the terminal extension, known as the International Building, was opened.

In 1980, the first supersonic airliner touched down - Air France's Concorde F-BTSC, which had flown from Paris.

On 1st April 1987, ownership was transferred to Birmingham International Airport plc, a public limited company, still owned by the seven councils. In 1993, in order to ensure future development plans could go ahead despite restrictions on public sector borrowing, the local authority owners reduced their shareholding to 49% so that BIA became a private company.

Elmdon past and present by Alan John Sherriff, 1995

The Spooners of middle England by Anthony Spooner, 1981

Damson by the pound by S F Beavan

Elmdon and the church of St Nicholas by T Onley, 1952

Check the online catalogue to see if the above books on Elmdon are available at your local Solihull library.

Let us know your memories of Elmdon, however recent, by completing a memory sheet attached below.